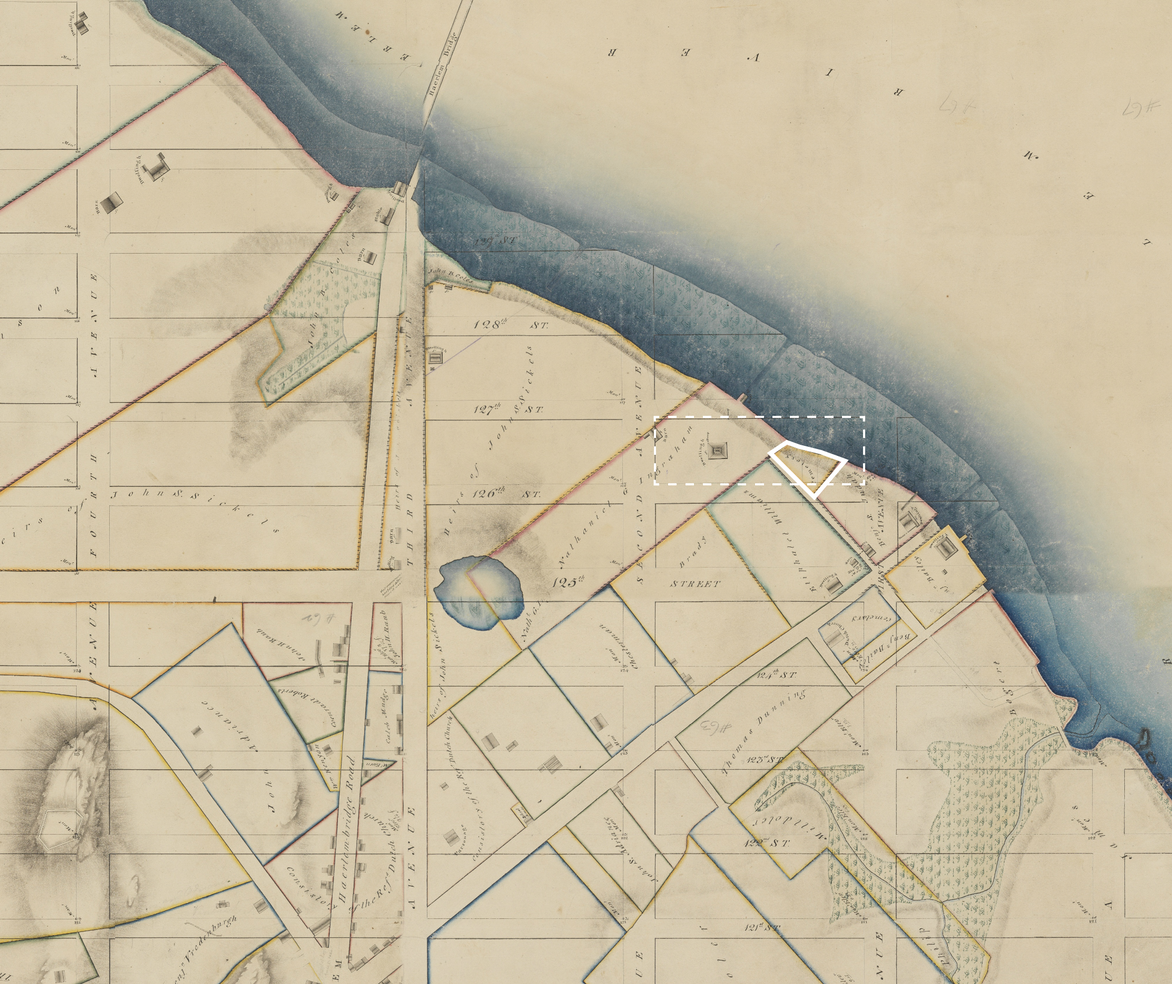 An Archaeology of Architecture: The Harlem and Pine Street African Burial Grounds

A lecture by Jerome Haferd

The talk will examine the history, advocacy, and futurity of two current efforts to re-claim and develop site of African enslaved burial in New York State. My work examines how the erased histories, violence, and the proposition of redevelopment of these sites trouble our disciplinary limits of Architecture, Archival practice, and Preservation.

Jerome Haferd is an architect and educator based in Harlem, NY. He is co-founder of the design and research practice BRANDT : HAFERD. Jerome’s work focuses on how architecture establishes a dialogue between contemporary phenomena and non-hegemonic histories, users and spaces. His writing on archaeology, blackness, and speculation has recently been published in Log and Project journals. Jerome is currently an adjunct professor at CCNY SSA and Columbia GSAPP. He is also a core initiator of Dark Matter University, a BIPOC-led, para-institutional network dedicated to transforming pedagogy and the space of knowledge production. He is currently teaching the course ‘Fugitive Practice’, a trans institutional course between Yale University and Howard University, and Dark Matter University. Jerome received his Master’s in Architecture at Yale University and his Bachelor’s in Architecture from The Ohio State University.

Organized as part of the Preservation Lecture Series, an initiative of the Historic Preservation Program at Columbia GSAPP. Free and open to the public. Virtual events hosted on Zoom Webinar do not require an account to attend.

GSAPP is committed to providing universal access to all of our virtual events. Please contact Meredith Brull via email at hp@arch.columbia.edu to request disability accommodations. Advance notice is necessary to arrange for some accessibility needs.

Zoe Crossland, 'The Forensic Trace: a hauntology of evidence' 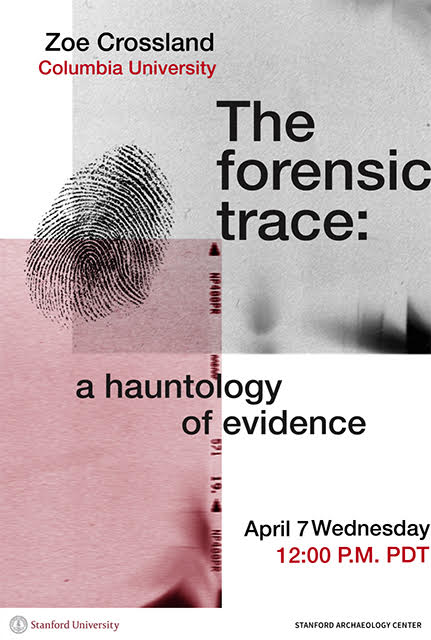 The forensic trace: a hauntology of evidence

Stanford Archaeology Center is proud to announce its Spring Quarter lunch club series, Ghost[s]: Archaeology and Recollection, which explores how ghost(s) as a theoretical framework can advance archaeological thinking. We are extraordinarily delighted to have Professor Zoë Crossland from Columbia University deliver a talk entitled The forensic trace: a hauntology of evidence on Wednesday, April 7 at 12pm PDT.
Webinar URL: https://stanford.zoom.us/webinar/register/WN_mTJuBzpySz-drUVKSnTI8Q

What kind of specters haunt the forensic investigation of human remains and how are they channeled and directed by forensic practitioners and others? What might the materially grounded practice of forensic inquiry offer to an understanding of Jacques Derrida’s hauntology and its potential? In this presentation I consider the material signs of forensic anthropology as located at the intersection of semiotic approaches articulated by Derrida and Charles S. Peirce, suggesting that forensic evidence both points to the limitations of hauntology as imagined by Derrida while also demonstrating its continuing relevance.

Zoe Crossland is Associate Professor of Anthropology and the Director of the Center for Archaeology at Columbia University. Her research deals with the historical archaeology of Madagascar, and with evidential practices around human remains. Her approach to historical inquiry is informed by Peircean “semeiotics,” which she uses to explore the imbrication of the material and the immaterial, the human and the nonhuman. The research Crossland has undertaken in Madagascar has been concerned with archaeologies of encounter, including a consideration of how material traces in the landscape made the dead present as historical actors (2014).

Center for the Ancient Mediterranean 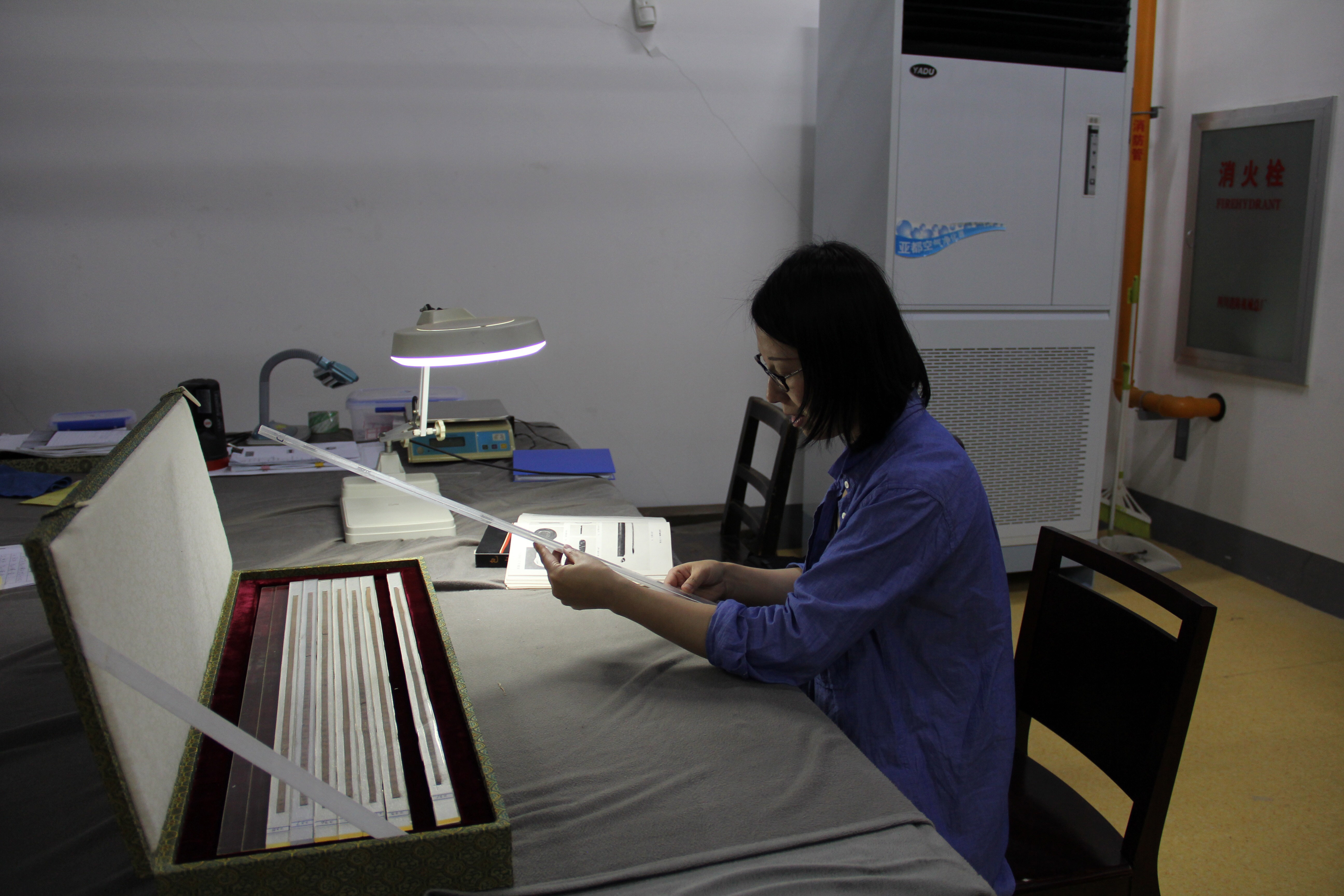 The Zhou (ca. 1045-256 BCE) historiography as represented by the received textual corpus from the pre-imperial era has a notable northern perspective. In this study, she proposes a de-centering and regionalizing approach to analyze one highly idiosyncratic bamboo manuscript text from the acquired Qinghua University collection, which was given the title “Chuju” (“Dwellings of Chu”) by the editors. By situating this text in the Jiang Han Region and its local chronology that are informed by the archaeological finds, I argue that the “Chuju” text provides the perspectives for writing a new kind of history of the Jiang Han Region that both problematizes the traditional Zhou
historiographical narrative of Chu and enables a fuller understanding of the first-millennium BCE world in early China.

Guo Jue is an Assistant Professor at Barnard College and a social and cultural historian of Early China. Her scholarly work lies at the intersection of history and archaeology. She uses both historical sources and archaeological materials including settlement data and material culture, entombed objects, and excavated manuscripts to understand past complex societies (terminus ante quem ca. 3rd century CE), with a geographical focus on central-southern China. Her broad research interests include regional history, cultural identity formation, complex society and state formation, environment and historical ecology, social and cultural memory, history writing, as well as religious and ritual practices. She is currently finishing her first book, entitled, Becoming the South: A Deep History of Region and Identity Formation in Early China

The Benin Bronzes: Towards the Resolution of a Long-Standing Dispute?

9apr9:30 pm- 2:00 pmThe Benin Bronzes: Towards the Resolution of a Long-Standing Dispute? 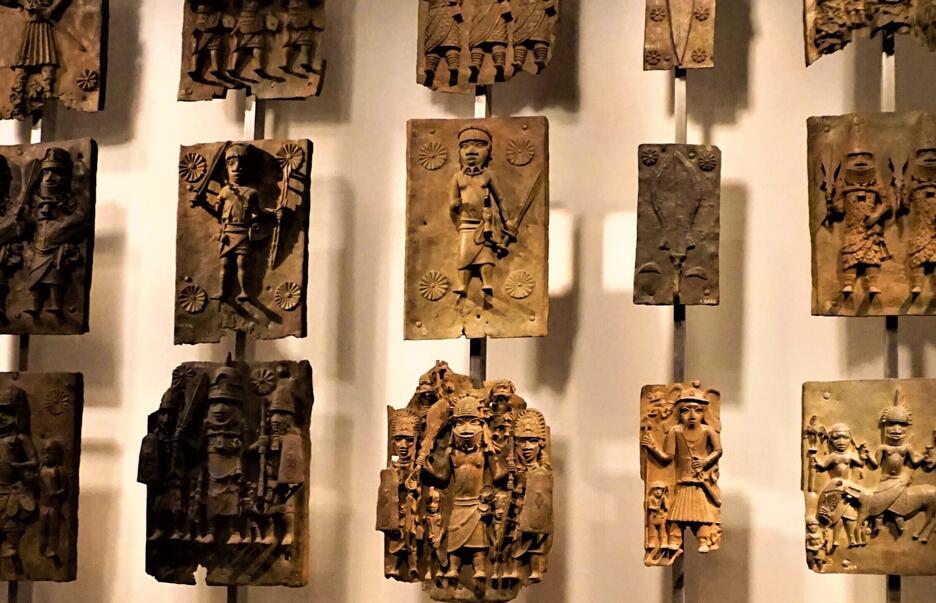 International Observatory for Cultural Heritage Symposium and The Italian Academy The Benin Bronzes: Towards the Resolution

International Observatory for Cultural Heritage Symposium and The Italian Academy

The Benin Bronzes: Towards the Resolution of a Long-Standing Dispute?

The Benin Bronzes were looted in 1897 from the Royal Palace of Benin City during a punitive expedition amid the British colonial expansion into West Africa. Their status is now central to the worldwide discussion about restitution claims and the return of cultural objects to their place of origin. At stake is what will become of these thousands of pieces from the Benin court, the most famous of which are cast metal heads and commemorative plaques.

Featuring speakers from Africa, Europe, and the U.S., this conference addresses Nigeria’s claims and the preparations for the physical return of the Bronzes, outlines collaborative international projects, and looks at alternatives to restitution such as those proposed by institutions in Europe and elsewhere. Speakers (including some from the Benin Dialogue Group, which gathers Nigerian authorities and global museum delegates) will focus on key issues in critical heritage studies such as the decolonization of Western museums; the role of digitization; decontextualization; and the essential relationship between local communities and objects from their past.

(Additional speakers and a detailed program are coming soon.) 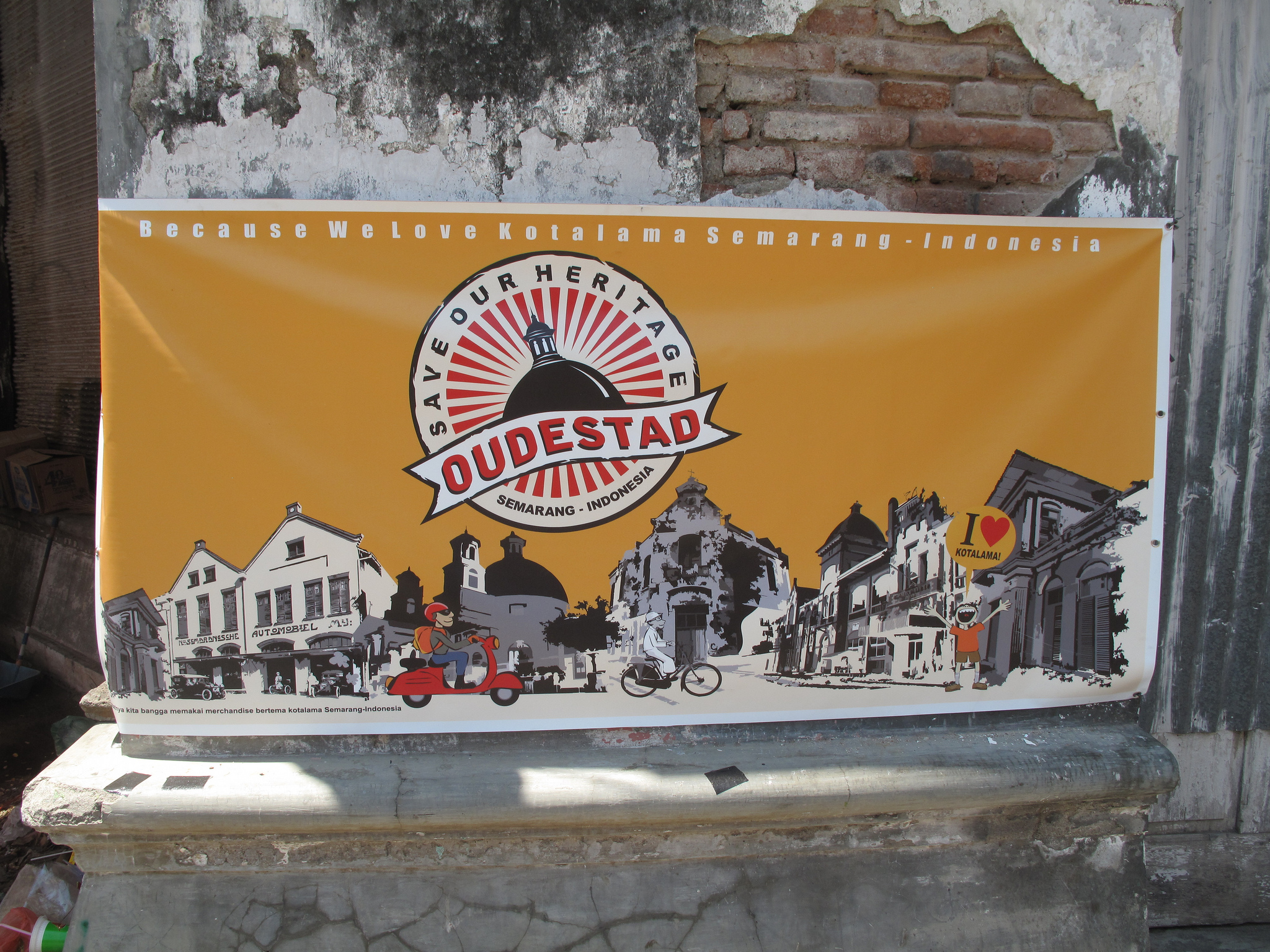 From ‘Dutch Leftovers’ to ‘Our Heritage’: Colonial ruins, urban activism, and memory politics in contemporary Indonesia

For decades, the field of heritage preservation in Indonesia focused almost exclusively on the country’s ancient archaeological sites and time-honored cultural traditions. Then, starting in the early 2000s, the country’s major cities suddenly witnessed a boom of local curiosity in colonial-era sites and structures, many of which are today being identified, protected, and celebrated as treasured “heritage”. Perhaps even more surprising, this re-appraisal of the material traces of imperial rule as “heritage” has been led not by the usual suspects of government agencies or tourism operators, but rather by a diverse and noisy network of local civil society actors, including Indonesian activists, artists, journalists, academics, community leaders, and students.

Why has this rush to re-invent the tangible “leftovers” of Dutch colonialism as “our heritage” emerged in Indonesian cities in recent years? What do these crumbling buildings and aging neighborhoods mean to the people who now advocate passionately for their preservation? What do they hope to achieve through their engagements with such sites, especially those young Indonesians who are often the most enthusiastic and creative in their activism? What can this growing urban heritage movement reveal about the complex dynamics of democracy and development in contemporary Indonesia? Drawing upon fieldwork in several Indonesian cities, this talk explores these questions and the extent to which Indonesia’s colonial past is being hidden or highlighted through the idiom of “heritage” – resulting in new forms of memory politics that have the potential to unsettle assumptions about what the popular engagement with this history “should” look like in the post-colony.

Lauren Yapp is an Instructor and Program Director at the Center for Asian Studies at the University of Colorado Boulder. Prior to this position, she was a Postdoctoral Fellow at the Joukowsky Institute for Archaeology and the Ancient World at Brown University. She earned her PhD in Anthropology from Stanford University and her MPhil in Archaeological Heritage and Museums from Cambridge University. Her work explores cultural heritage preservation, memory politics, civil society movements, and postcolonial urbanism in Southeast Asia.

Camilla Sturm, “From guguo to gucheng: Revising the role of Neolithic walled towns in the story of Chinese ‘civilization’”

30apr12:00 pm- 1:15 pmCamilla Sturm, “From guguo to gucheng: Revising the role of Neolithic walled towns in the story of Chinese ‘civilization’”

Tang Center for Early China On Altars of Soil Lecture Series “From guguo to gucheng: Revising the role of Neolithic walled towns in the story of Chinese

Models of sociopolitical change in early China envision the rise of states and the development of civilization as following a neat evolutionary trajectory. One popular such model describes this trajectory as having three stages – guguo, fangguo, diguo (archaic state, regional state, empire) – with each stage characterized archaeologically by larger and more stratified walled sites. Viewed through this lens, the emergence of walled towns across China during the late Neolithic ushered in the subsequent rise of Bronze Age states. Despite the strong progressivist quality of such narratives, these models are often conceived of in reverse. In practice, archaeologists and historians work their way backwards through the material and archival records, tacking not from Neolithic walled towns to Bronze Age states but from states to walled towns, from guguo to gucheng. This approach risks a teleological rendering of the past, where more recent histories shape the deeper past and obscure its wide-ranging diversity.

This presentation focuses on a very different (pre)history of walled towns in early China. I draw on multiple lines of archaeological data to chart the specific, local histories of two Neolithic walled towns in middle Yangzi River valley. With this data, I argue that these communities were structured around collective action and not the hegemonic rule that has long been assumed. These findings break with conventional understandings of sociopolitical life in early China and challenges us to rethink broad narratives of the rise of Chinese ‘civilization’.

Camilla Sturm is an anthropological archaeologist with interests in craft production, political economies, social learning, and identity. Her research combines traditional archaeological field practices with geochemical and experimental analyses and is primarily focused on the production, exchange, and use of pottery in China and Mongolia. Her work focuses on three interconnected aspects of craft economies: how people learn and share the specialized knowledge of their crafts, how decisions at grassroots and at institutional levels shape economic networks, and how resilient these networks are to social, political, and environmental changes. Dr. Sturm is currently a Term Assistant Professor at Barnard College. Her work has appeared in such journals as the Journal of Archaeological Science, American Antiquity, the Journal of Archaeological Research, and 中央民族大学学报, or the Journal of the Central University of Nationalities in China.