Anthropologist Waldemar Bogoras collected most of these objects during the Jesup North Pacific Expedition (1897–1902). Helmed by anthropologist Franz Boas, this expedition sought to research the sociocultural links between peoples on both the Alaskan and Siberian sides of the Bering Strait. In addition, Lieutenant George Thornton Emmons collected material while stationed in the far north in 1895-1896. 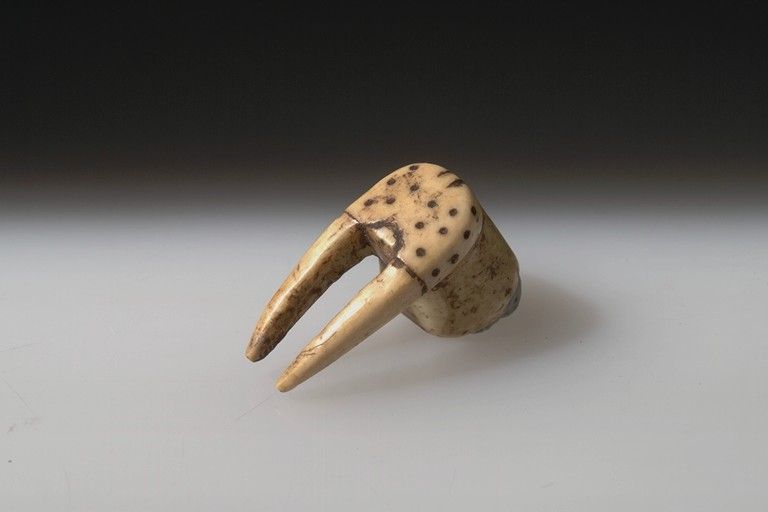 The ivory walrus head was probably once part of a Yupik hunting visor. It provides an excellent window to look into the technique and practice of Yupik hunting culture. Yupik were historically both economically and spiritually connected with the ocean. It was in their faith that the honorable sea mammals should be killed with beautiful weapons and be consumed and used with respect. These ivory walrus heads were usually depicted with realistic details and mounted on the front middle of a visor, accompanied by ivory decorative plates with abstract and symbolic patterns. Visors were used by Yupik hunters to protect themselves from the glare of sunshine, ice and water, as well as to disguise their human identity. It was also believed that hunting visors provide spiritual power to assist the hunt, especially visors with ivory amulets. Hunting visors with ivory amulets were made by Yupik on both sides of the Bering Sea and the identical styles and forms demonstrate their shared culture and history. 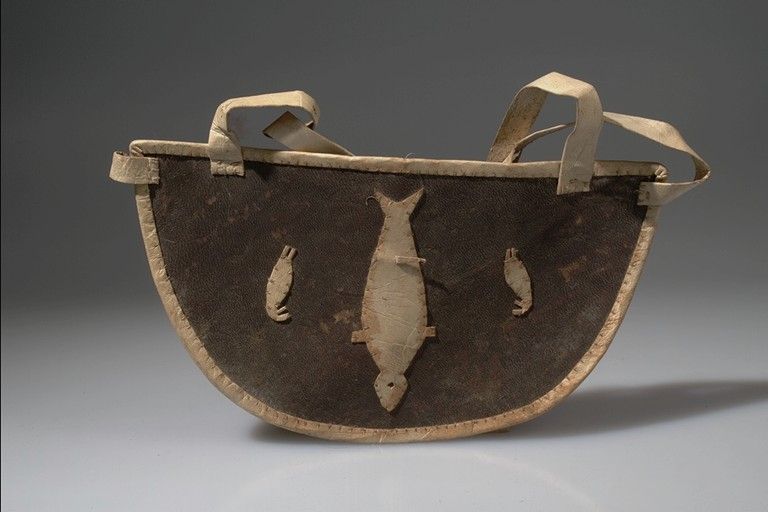 Waldemar Bogoras collected this hide eye shade from a boat owner. Bogoras observed the man wearing it as he steered his craft on the Bering Sea. Straps held the shade in place to shade the eyes during a marine mammal hunt and the decoration depicts a central orca flanked by two walruses. Another shade was collected from the harpooner of the same boat whose shade was decorated with a walrus’ face. The Yupik would often decorate their objects with representations of things they wished to attract such as sea mammals. Bogoras compared these shades to the function of masks, indicating more than just a practical purpose. Masks have served many functions as part of complex Yupik world views. One function of masks Bogoras may have been referring to includes reminding people of their connection to animals and the environment. If a hunter disrespects the animals he kills he will not be able to hunt that type of animal again. The decoration on this shade likely served to remind the wearer and viewer of their connection to and dependence upon their hunt. 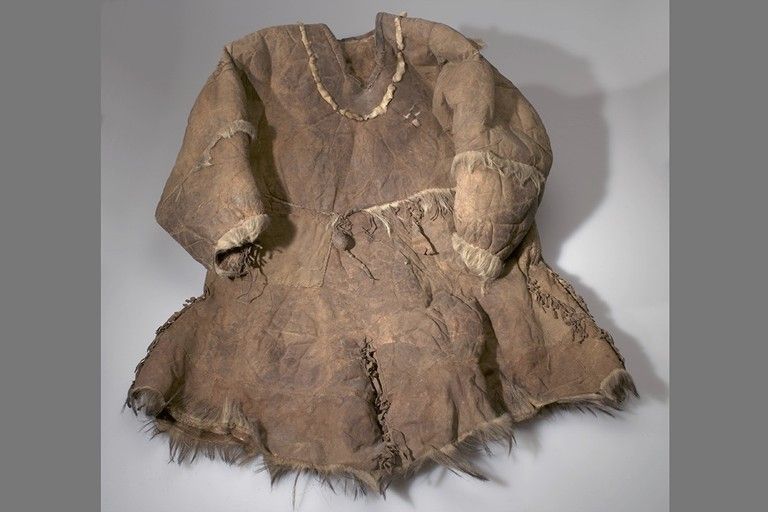 This shaman’s coat, which may have belonged to the Chukchi shaman Scratching Woman, was collected by Bogoras at Mariinsky Post, Siberia in 1902. It is most likely made from reindeer hide, sinew, and fur, which serves as the coat’s lining and trim. The coat’s characteristic form identifies its owner as a male shaman; female shamans rarely wore such garments. Chukchi shamans were religious figures and community leaders who offered advice, dispersed medical remedies, performed magical acts including ventriloquism, and conducted public and private ritual ceremonies. They ornamented their coats with white fringe and amulets. Shamans believed that their coats increased in value by becoming worn and ripped, although the reason for this perception is not fully understood. Unlike in other forms of Siberian shamanism, this coat would not have been worn during ceremonies since Chukchi shamanistic rituals primarily took place in the dark, hot inner rooms of houses. Instead, it was most likely worn outdoors by shamans while going about their daily activities. Still, because Chukchi shamans held positions of elevated status in their communities, this coat would also have denoted the social standing of its wearer. 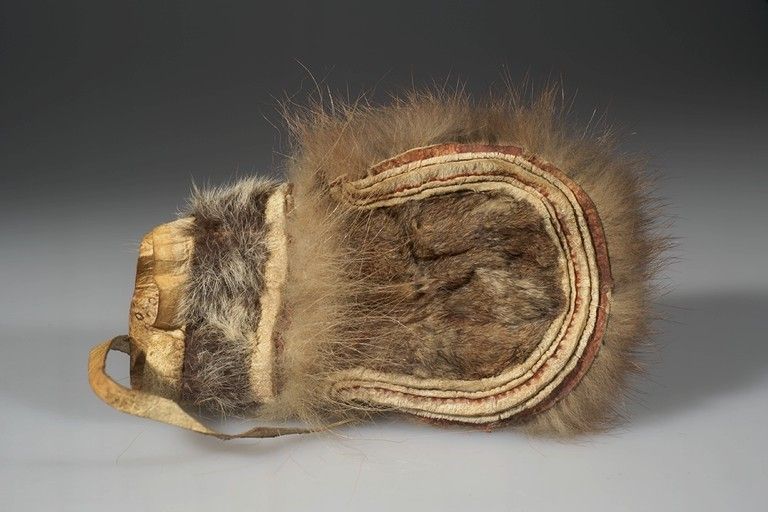 This Yupik bag, about the length and width of a human hand, was used by both men and women to hold tobacco. The squirrel hide most likely originates from a type of local Arctic ground squirrel. Historically the sinew, possibly from a whale or reindeer, gave pliability to the pouch. Clipped reindeer fur along with a dark red pigment decorate the outside of the pouch. Worn on belts, these bags allowed individuals to store personal supplies of tobacco.

Tobacco from the Russians was an essential and highly desirable trade commodity at fairs. These fairs brought together various Russian officials with Native maritime- and tundra-based groups. Native contributions used for trading tobacco included fauna from the Siberian region: reindeer, walrus, seal, or fox. Also, the wildlife components of the pouch were emblematic of Yupik trade with tundra-based Chukchi. The Chukchi herded reindeer and set traps to capture small animals such as squirrels. Lieutenant George Thornton Emmons collected this pouch along the Siberian coast of the Bering Sea. The AMNH purchased this pouch shortly before the Jesup Expedition. 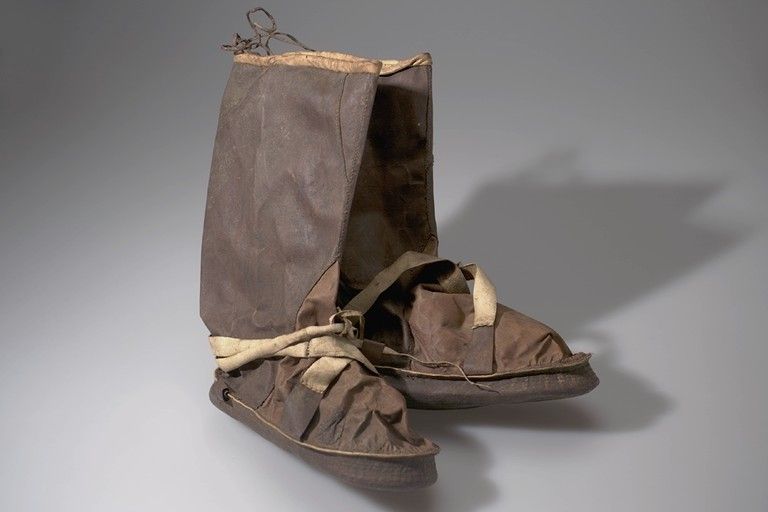 This pair of summer boots was acquired from Siberia in 1901 by Bogoras and is attributed to Maritime Chukchi. Typically, whaling crews would wear this type, mainly made out of seal hide, to ‘survive’ the damp weather in summer. As an ideal material favored for its thickness and oiliness, seal hide makes the boots waterproof. Chukchi would also use grass insoles stitched with sinew when wearing summer boots without socks to protect the thin, pliable soles. Generally, boots also played various roles in Chukchi culture rather than merely being regarded as regular clothing. Every summer, thousands of boots would be bartered for other commodities, such as white flour and chewing tobacco. A boot could also participate in different ceremonies, for example, being suspended as a substitute for the so-called “divining-stone” during divination and in the ceremony for a newborn. Summer boots are still produced using similar materials today, but only worn on special occasions. 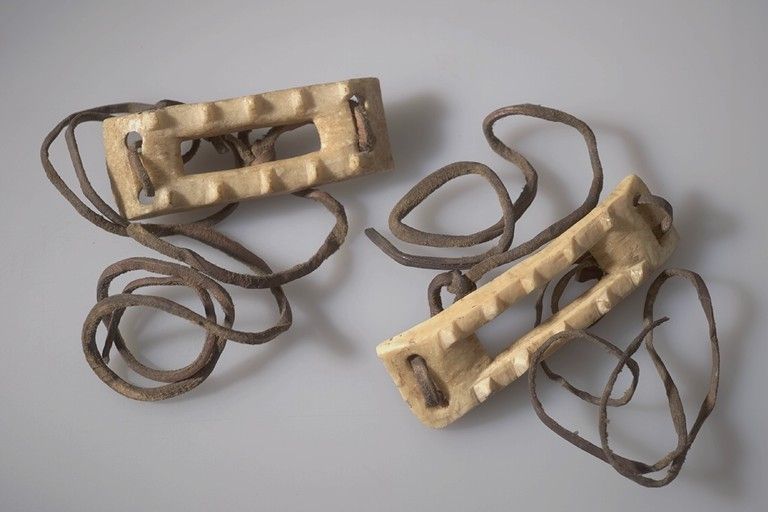 Though the winters in Eastern Siberia are long and cold, Maritime Chukchi people and their neighbors have mastered how to live in such freezing conditions. Among their innovative equipment for survival in a frozen world are ice creepers, such as this pair collected by Waldemar Bogoras in 1901. Maritime Chukchi once made ice creepers from the tusks of the walruses they hunted, as with this pair. Today they use ice creepers made of metal. They tie the ice creepers to the bottom of their boots with the long straps. The sharp spikes grip the slippery ice, allowing the wearer to walk without fear of sliding about. Though invented in response to Siberia’s harsh winters, these tools are particularly important in spring when the ice begins to melt and becomes slicker. Chukchi probably wore them when cutting pathways through thick sea ice; boats were launched from these channels, making ice creepers key to the Maritime Chukchi coastal way of life. 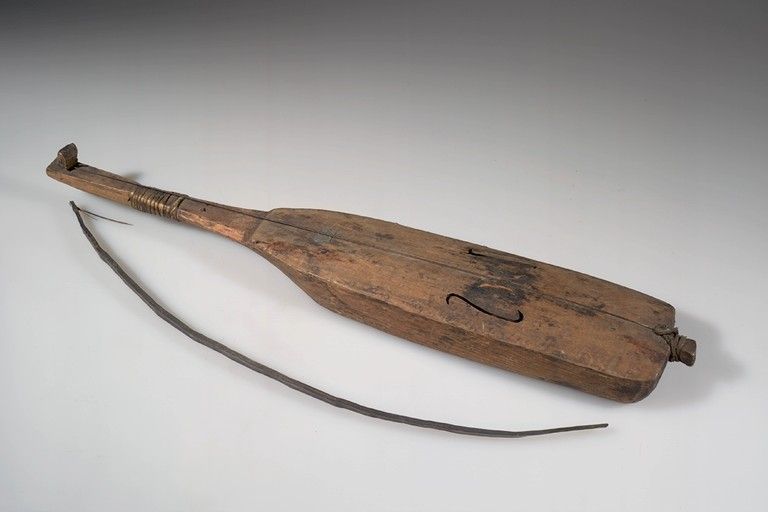 The qelutviaq draws inspiration from the violin in form, demonstrated by its f-shaped resonance holes and short half-moon bow. Markings between the holes indicate that it is missing a bridge. One sinew string is stretched between a hooked head and large bottom peg. However, it cannot be tuned, suggesting that the instrument did not produce complicated or precise melodies. It would have been more effective at making sounds similar to Chukchi throat-singing, which mimicked animals and nature sounds such as birds, wolves, and the howling of the wind through rhythmic throat breathing, guttural vocalizations, and piercing high-pitched calls.

The development of the qelutviaq is representative of the cultural exchange that occurred over centuries of intermingling between the peoples of the Siberian and Alaskan Arctic, Russia, and foreign visitors. From the late 18th century, music was an important communication tool for soothing the social tensions caused by linguistic differences. In 1848, the fiddle was used by local dancers as accompaniment at a cross-cultural social event held by the crew of the British HMS Plover. This appreciation was mutual, as over the ship’s ten-month stay in the Chukchi Peninsula, the crew of the Plover also adopted Native drums into their performances. 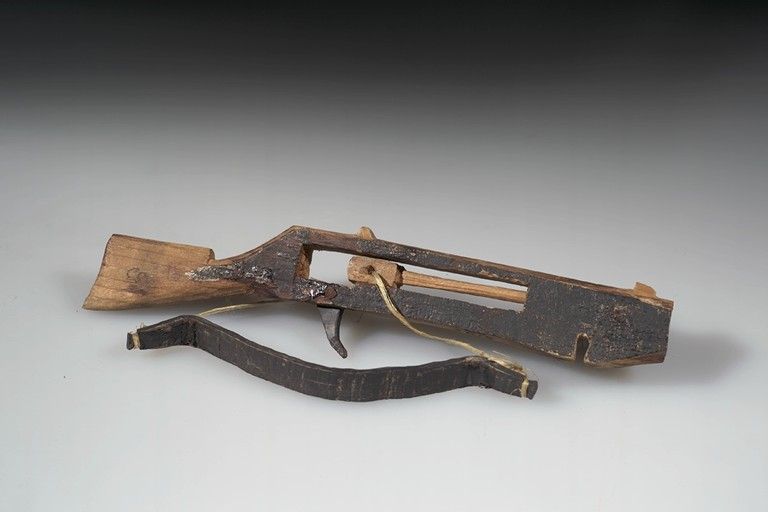 This toy crossbow was made of wood, baleen, sinew, and pigment, and was collected by Bogoras at Indian Point during the Jesup Expedition in 1901. Unlike traditional Yupik bows, the toy crossbow was a typical Western-derived recreational object, possibly with origins in Russia, and popularly used by children. Since hunting was a required survival skill for Yupik daily subsistence, children began shooting training with toy bows or toy crossbows at a very early age; sometimes they took part in hunting as an assistant hunter to their fathers. Little Yupik boys favored toy crossbows over traditional toy bows because they require less strength to hit a distant target with a small-sized arrow or small, round stones and sticks by simply pulling the trigger. 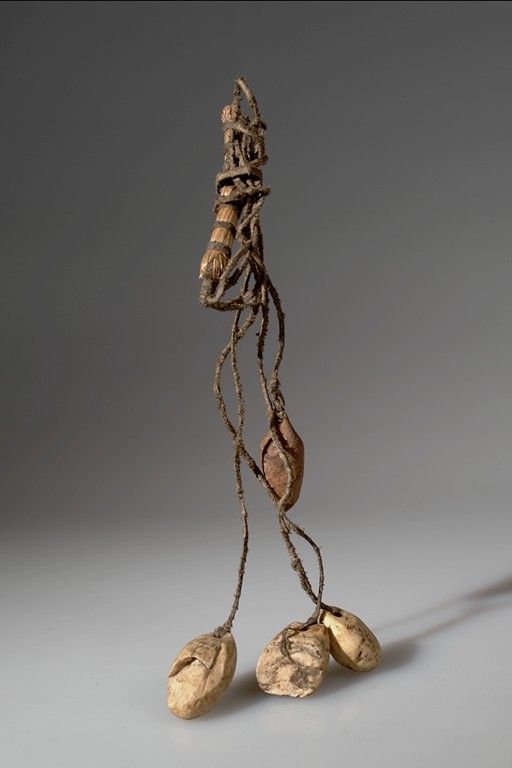 Before the advent of the shotgun, Chukchi and the neighboring Yupik used bolas as hunting weapons to capture flying birds. Although bolas vary in design, they are usually made of a handle attached to strings. At the end, two or more weights are attached. This bola consists of four strings made of plant fiber, fastened together with hide to form a handle and attached to egg-shaped weights made of walrus ivory and bone. Hunters wore them coiled on their heads or around their waists for easy transport, and swung them horizontally over their head in a circular motion to release them into low-lying bird flocks. The weights would consequently turn as a fan as they flew through the air until they entangled the birds’ wings and necks, bringing them to the ground. 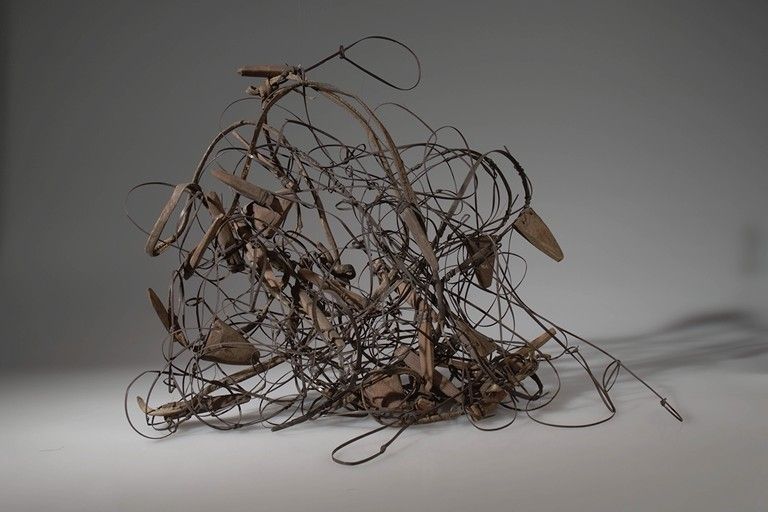 These tangled snares made of baleen, wood, and hide (also referred to as nooses) would have been used by Yupik men to hunt and trap waterfowl while in flight. The traps were either attached to a wooden buoy and thrown out to sea, or they were set up on land positioned in tree branches, on nesting rocks, around the entrance to nets, or in bushes. Waterfowl were an extremely valuable resource for Yupik peoples, providing them not only with food but also non-food resources such as skin, feathers, and colorful beaks. 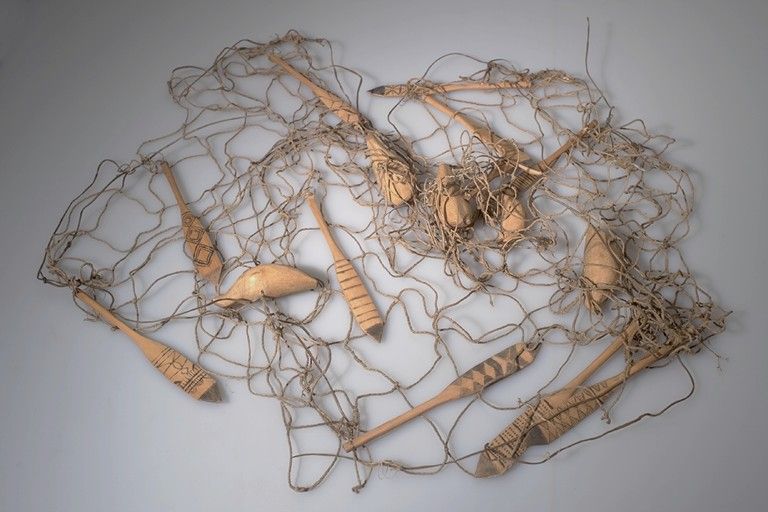 Unlike nets normally used in the sea for fishing, Maritime Chukchi set this sinew net on land during the Kere’tkun ceremonial. Kere’tkun was an annual thanksgiving ceremonial at the end of fall, honoring Kere’tkun, the Master of the Sea, in hope for the renewal of animal resources in the upcoming year and future hunting success.

During the course of the ceremony, the net was suspended from the smoke hole in the center of the dwelling. It was spread out horizontally, with its edges fastened to the walls. A special pole was passed through the net and out through the smoke hole. With other magical objects believed to hold the spirit of umiak (hunting boats normally made of walrus skin) tied to it, this pole was seen as the source of power of the ceremony. All around the net are suspended wooden models of gulls and paddles, painted ornamentally with seal blood. This ceremonial net was collected by Waldemar Bogoras at Mariinsky Post, Siberia, during the Jesup Expedition. 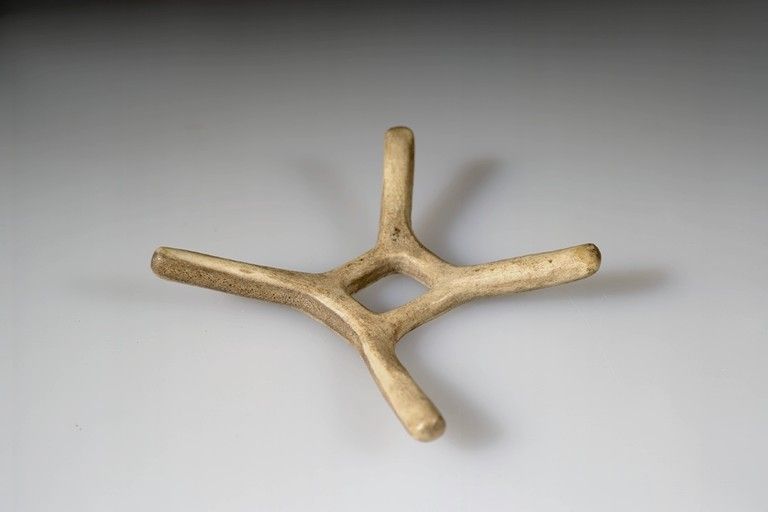 This bone tool was used by Siberian Yupik men. Lieutenant George Thornton Emmons collected this object at the end of the 19th century on one of his few trips to Siberia, classifying it as a “wrench.” The material is likely seal, whale, or reindeer bone. Its four prongs are unique among other wrenches from similar locations and periods, while the shape and positioning of the hole coincide with more typical arrow shaft wrenches found in museum collections. If not a straightener for an arrow shaft, this tool was used to facilitate some tasks related to hunting and fishing, perhaps giving more leverage or strength to its user. 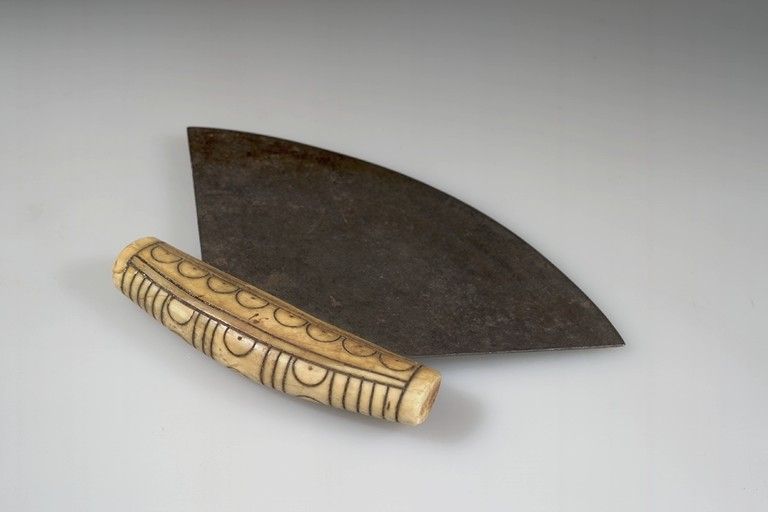 This Yupik woman’s kitchen knife was collected by Waldemar Bogoras in 1901 during the Jesup North Pacific Expedition. Knives in this style, typically featuring a horizontally-oriented handle and crescent-shaped blade, are generally known as ulu knives and are ubiquitous tools among Arctic peoples. The maritime Yupik people relied on their natural surroundings for sustenance, shelter, and clothing. Yupik women would use this knife for chopping meats and plants, and its crescent-shaped blade facilitated the proper skinning and scraping actions needed to harvest pelts and to slice meat.