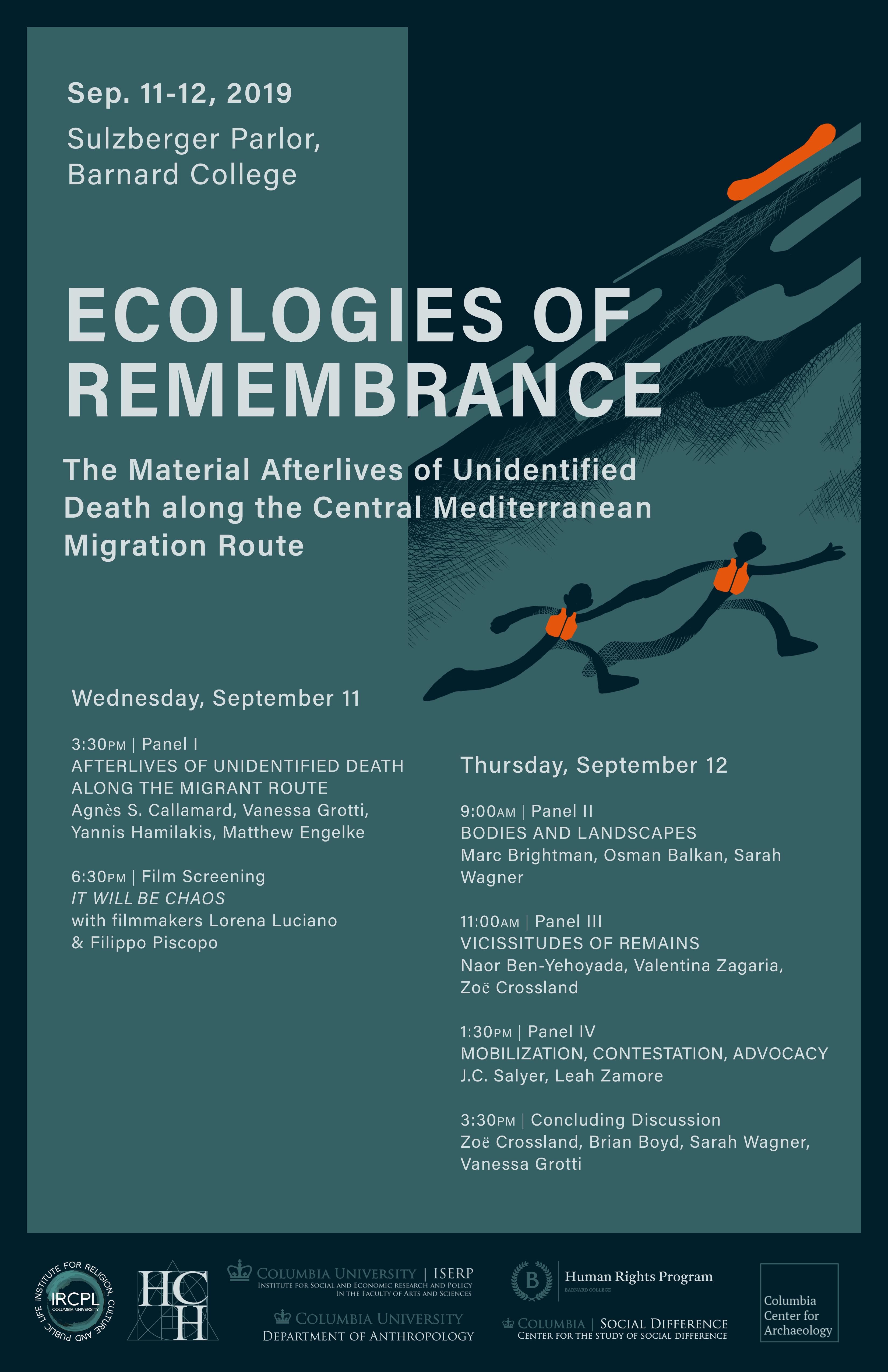 Ecologies of Remembrance works toward an ethnographic study of the material afterlives of contemporary migrant death along the Central Mediterranean route to Europe (between North Africa and Italy). The news media around the Mediterranean are frequently dominated by the aftermath of maritime disasters in which dozens, sometimes hundreds of migrants die on the perilous crossing to southern Italy from North Africa. Whilst migrant death is a recurring subject in academic study and journalism, scarcely any research is carried out on the ground into the material and symbolic treatment of unidentified human remains (unlike along the US-Mexico border), even in key receiving and transit countries such as Italy. Yet the social afterlife of human remains is of immense importance in the case of migrant deaths because of the ways in which they bring into focus the webs of relations in which migrants are caught, bringing together transnational kinship networks, local landscapes, local communities and solidarity groups and wider political motivations and actions. Migrant deaths on the Mediterranean route resonate more powerfully and in different ways from other cases of unidentified death, of migrant agricultural workers for example.

How do people dispose of the anonymous remains of such disasters? What kinds of social relationships and connections are generated by the process? What are their motivations and emotional involvements of the people concerned? And what are the historical resonances of these unique and complex mortuary practices? What are the political consequences of the sacralization of the loss of human life juxtaposed against the normalization of the bare life existence of displaced people? By focusing on the passages of unidentified human remains in Italy from retrieval at sea through forensic processing and burial, we have organized this conference to depart from previous studies of border regimes and frontier deaths, and into a broader ecosystem of local, national, and transnational emergency response, scientific evidence-making, mourning and remembrance.

This workshop brings together research papers on works of tracing, forensic investigation, and burial, connecting metropolitan centers with Tunisia, Sicily, Lampedusa and Calabria. We hope to assess the entanglements between transnational kin networks, local landscapes and communities, religious and solidarity groups, and national and international political discourses. The sites and practices we am to consider include sites of storage of remains associated with unidentified deaths on the migration trails in Tunisia and Italy; exhibition spaces (formal and informal); temporary morgues and forensic laboratories; sites associated with maritime retrieval and rescue; and rural cemeteries. By tracing the passages of bodies and materials along manifold routes, we hope to bring the works and lives of different actors into consideration. This includes activist groups, forensic scientists, emergency personnel, local, regional or national politicians, clerics and local people such as well-wishers who decorate tombstones. Through the exploration of mourning without kin, this conference will follow the trail of sorrow and justice, local ritual appeasing and burial of migrant remains.