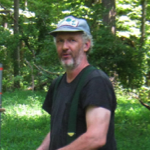 Jeff Benjamin is based in the Deprtament of Anthropology. He came to Columbia with an interest in sound and the sonic past. He has since broadened his research in an attempt to formulate a sensory archaeology of the early industrial past by attending to discarded sensibilities; the retrieval of the insensible; a redemption of the dismissed.

Some of his publications include:

2015. “Listening to Industrial Silence: Sound as Artifact,” in Reanimating Industrial Spaces, ed. Hilary Orange. Left Coast Press.
2016. “The Repeated Tone of Civilization,” in Music, Memory and Space. Edited by Johannes Brusila, Bruce Johnson and John Richardson. Intellect Books.
2017. With Matt Edgeworth. “What is a River? The Chicago River as Hyperobject,” in Rivers of the Anthropocene. Edited by Jason Kelly. Berkeley: University of California Press.
2018. “Human-Plant Mutualism in the Industrial Built Environment,” in Pinsapo Literary Journal. Edited by Miriam Atkin, Claire DeVoogd and Öykü Tekten. New York: CUNY.
2018. “An Archaeology of Air,” in Digging for Words, British Archaeological Reports. Edited by Rune Iversen and Guus Kroonen.
2019. (forthcoming) “Intangibles in I.A.” Editor. I.A.: The Journal of the Society for Industrial Archeology. Houghton, Michigan: The Society for Industrial Archaeology.
2019. (forthcoming) “Remembered into Place,” in The Routledge Handbook of Memory and Place. Edited by Sarah De Nardi, Hilary Orange, Steven High. London: Routledge.
2019. (forthcoming) “The Past Above Us,” in Interarkeologia. Edited by Marko Marila. Proceedings of the Eighth Baltic Archaeological Seminar. Hanko, Finland.